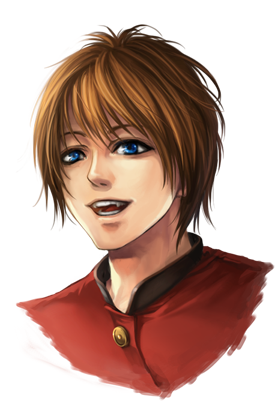 As far as school goes, he’s good with numbers, but his English is weak.

When he is in the company of those he is closest to, he can be both lively and straight forward. He’s realistic, often seeming harsh or negative in his assumptions. Surprisingly he can also be impulsive and get carried away if he feels strongly about something.

Lau is Yuuki’s best friend, and while being quite dependant on him, he also does his best to stick up for Yuuki, always wanting what’s best for him.

Lau is born to a Chinese mother, and Japanese father. He's the second child in a family of four kids; three sisters, two younger and one older. As if that wasn’t bad enough, his aunt and cousin lives in the apartment above theirs, so he often flees to Yuuki when his family becomes too much of a hassle.

Although Lau hates working in the restaurant for his parents, he loves cooking and wants to study it in the future.