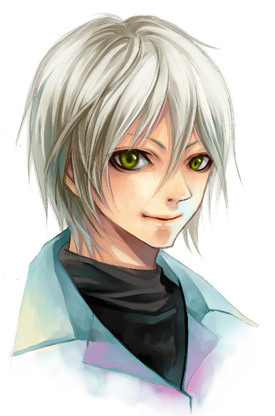 Yuuki is as his name suggests, courageous and strong-spirited. He chooses his own ways regardless of what others think. He’s protective of those he cares about, and goes to great length to help and support them. Often on accord of himself.

His decisions aren’t always the greatest, but he follows his heart, not his head. Because of this, he might end up confused and often hurts himself more than he likes to admit, this is especially true in regards to Aki. He gets more involved in things than first planned.

He’s fun-loving, but serious. Losing his dad at a young age caused him to grow dependable and mature, often making him act older than he is.

He's smart, but doesn't have a lot of time for schoolwork, and is barely passing. What he lacks in school-knowledge he makes up for in life experience. After high school he hopes to get into a culinary school, majoring in sweets and desserts.

Weakness: Tends to put others before himself, worries too much. Aki
Occupation: Student, works part-time for his uncle
Secret: His eyes aren’t really green, he wears contacts and dyes his hair white.
Best qualities: Fair/Just, mature, kind
Pets: A parakeet named Juno